Editor’s Note. The new tax law makes big changes in how businesses are taxed, and which forms of business organization are the most advantageous. Many of our San Francisco clients are not only high income but also often have diverse business interests, including overseas interests that expose them to international tax issues. Others, especially those who work in San Francisco’s vibrant technology sector, have business interests in start ups (we’re known as the best CPA firm for startups in San Francisco), or perhaps have stock options as part of their compensation. Still others have small or medium-sized businesses and want to know how to optimize their businesses here in the San Francisco Bay Area to minimize the tax bit. This post is a discussion, but if you need a consultation, reach out to one of our San Francisco-based tax CPAs.

An overview of some of the significant provisions affecting business taxpayers are identified below. 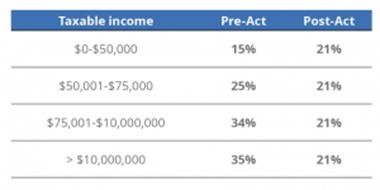 While alternative minimum tax (“AMT”) was left in place for individuals, the corporate AMT of 20% has been repealed for tax years beginning after December 31, 2017. The full amount of the minimum tax credit (“MTC”) will be allowed in tax years before 2022 as the AMT credit can offset regular tax liability in an amount equal to 50% (100% for tax years beginning in 2021) of the excess of the MTC for the tax year over the amount of the credit allowable for the year against regular tax liability.

Under Code Section 179, taxpayers may elect to deduct the cost of qualifying property. For taxable years beginning after December 31, 2017, the Act increases both the maximum amount a taxpayer can expense and the phase-out threshold as follows:

Under pre-Act law, businesses could immediately deduct 50% of the cost of eligible property (of which original use began with the taxpayer) in the year the property was placed in service before 2020 (2021 for certain property with a longer production period). The Act extends and modifies bonus depreciation by allowing businesses to deduct 100% of the cost of eligible property acquired and placed in service after September 27, 2017 and before January 1, 2023 (before January 1, 2024 for certain property with longer production periods). For property placed in service in later years, the bonus depreciation phases down as follows:

The Act removes the ‘original use’ condition that only new property qualifies for bonus depreciation. Furthermore, the Act expands the definition of eligible property to include qualified film, television and live theatrical productions for productions placed in service after September 27, 2017. A production is considered placed in service at the time of initial release, broadcast, or live staged performance.

The Act repeals the election to accelerate AMT credits in lieu of bonus depreciation. 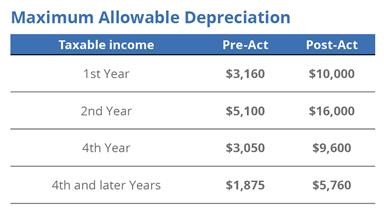 The Act modifies the net operating loss (“NOL”) deduction by eliminating the carryback period, making the carryforward period permanent, and reducing the amount utilizable in a given year as follows:

*A 2-year carryback applies in the case of certain losses incurred in the trade or business of farming.

**NOLs of property and casualty insurance companies can be carried back two years and carried over for 20 years to offset 100% of taxable income in those years.

Pass-through entities are required to determine the net interest expense disallowance at the entity (e.g. partnership) level, not the partner level.

Businesses with average annual gross receipts for the three-tax year period ending with the prior taxable year that do not exceed $25 million are exempt from these rules.

Use of the following new provisions are considered a change in the taxpayer’s accounting method.

Research and Experimental Expenditure Recovery Period – Under pre-Act law, with election, certain research and experimentation (“R&E”) expenditures were treated by taxpayers as deductible in the current year, capitalized and recovered ratably over useful life of the research (but not over a period less than 60 months), or capitalized and recovered over a period of 10 years. Under the new law, amounts paid or incurred for specified R&E expenses (including software development) in tax years beginning after December 31, 2021 must be capitalized and amortized ratably over a 5-year period. The period is extended to 15 years if the R&E expenditures are conducted outside of the U.S.

Advanced Payments – The Act codifies Rev. Proc. 2004-34 to allow taxpayers to defer the inclusion of income associated with certain advanced payments to the end of the tax year following the tax year of receipt if such income is deferred for financial statement purposes.

Expanded Test for Cash Method of Accounting – Under pre-Act law, C corporations and partnerships with a C corporation partner were required to use the accrual method of accounting, unless these businesses had average annual gross receipts of not more than $5 million over the prior three years. Under the new law, the three-year average gross receipts threshold is increased from $5 million to $25 million.

Inventory Accounting and Capitalization – Under the Act, businesses that meet the $25 million average annual gross receipts test are:

The Act is the largest overhaul of the tax system in over three decades impacting both individuals and businesses. Unlike the individual provision, which are generally temporary and sunset after 2025, many of the business provisions are permanent. Therefore, we recommend reviewing your business tax situation with Safe Harbor’s experienced tax professionals and consultants – we are here to help you navigate the changes of this comprehensive tax reform.

Editor’s Note. As you can see, the law’s changes of the tax code are complex with respect to businesses of every type, including corporations. If you own a business or have business interests in San Francisco, the greater Bay Area, or elsewhere in California, reach out to us for a free consultation on our business tax preparation services. We often act as an Outsourced CFO for many small or medium-sized businesses, and we can help you as the #1 business tax CPA in San Francisco. Your first step is that call.