Editor’s Note. The so-called “Trump Tax Law” is provoking confusion and anxiety throughout the San Francisco Bay Area. Politics aside, we’re talking about the provisions of the new tax law. Among them are reductions in the deductibility of local and state taxes (a big issue in high tax California) as well as big changes to deductions and the relationship between individual income and business income. If you are looking for a tax CPA here in San Francisco, one who work with high net worth individuals and those with complex tax issues, please reach out for a consultations on individual tax preparation. We’re known as one of the best tax CPAs in San Francisco, California.

After unifying the House and Senate tax reform provisions into one piece of legislation, the Tax Cuts and Jobs Act, H.R. 1 (“the Act”) was approved in the House and Senate and signed by President Trump on December 22, 2017. The Act represents the most significant revision of the US tax code in decades and will have many long-term effects.

An overview of some of the significant provisions affecting individual taxpayers are identified below.

The Act provides four tax rate schedules, each of which is divided into income ranges that are taxed at progressively higher marginal tax rates as income increases. Under pre-Act law, individuals were subject to the following tax rates: 10%, 15%, 25%, 28%, 33%, 35%, and 39.6%. For tax years beginning after December 31, 2017 and before January 1, 2026, the following tax brackets apply for individuals: 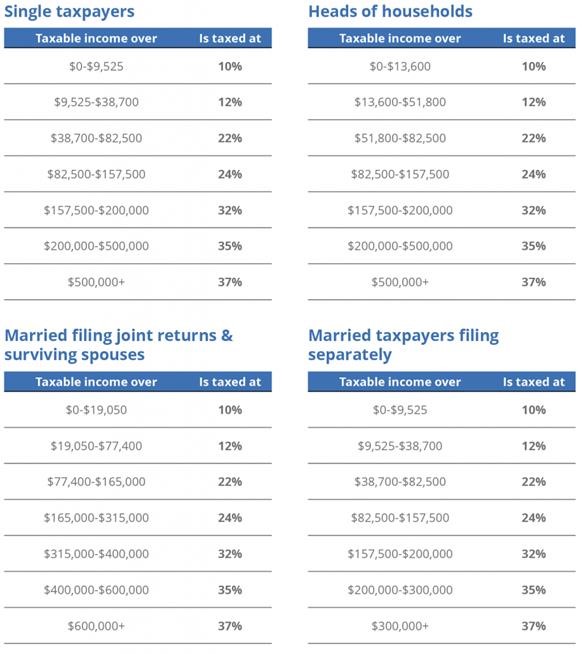 The Act also provides four brackets for estates and trusts as follows:

Taxpayers who do not itemize their deductions are allowed to reduce their adjusted gross income (“AGI”) by the standard deduction to determine their taxable income. The amounts under pre- and post-Act are as follows:

Under pre-Act law, income from pass-through businesses (sole proprietorships, partnerships, and S corporations) was reported on the individual tax returns of the owners or shareholders, and therefore subject to individual income tax rates. Under the new law, for tax years beginning after December 31, 2017 and before January 1, 2026, a non-corporate taxpayer (including trusts and/or estates), would be allowed to deduct 20% of “qualified business income” from a sole proprietorship, partnership, or S corporation, as well as 20% of qualified real estate investment trust (“REIT”) dividends, qualified cooperative dividends, and qualified publicly traded partnership income.

“Qualified business income” does not include an S corporation shareholder’s reasonable compensation, guaranteed payments, or payments to a partner who is acting in a capacity other than his or her capacity as a partner.

“Specified service trades or businesses” include any trade or business in the fields of accounting, health, law, consulting, athletics, financial services, brokerage services, or any business where the principal asset of the business is the reputation or skill of one or more of its employees.

The exemption for estate and gift tax for estates of decedents dying and gifts made after December 31, 2017 and before January 1, 2026 doubles from $5 million to $10 million (indexed for inflation occurring after 2011).

While alternative minimum tax (“AMT”) has been repealed for corporations, individuals remain subject to AMT under the new Act but with increased exemptions and phase-out thresholds. The changes to the exemptions and thresholds are as follows: 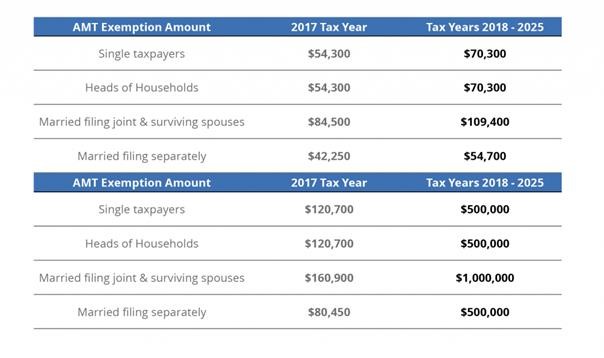 The Tax Cuts and Jobs Act will be the largest overhaul of the tax system in over three decades and will have a significant impact on both individuals and businesses. Unlike the business provisions, which are generally permanent, many of the individual tax provisions in the Act are temporary and sunset after 2025. Therefore, we recommend reviewing your personal tax situation with Safe Harbor’s experienced tax professionals and consultants – we are here to help you navigate the changes of the comprehensive tax reform.

Editor’s Summary. This post has overviewed some of the tax changes that impact individuals under the new tax law. If you live or work in San Francisco, in the San Francisco Bay Area, or elsewhere in California, and are looking for a CPA firm that prepares individual taxes and has expertise in complex tax issues, reach out to one of our San Francisco-based accountants for a consultation!