After unifying the House and Senate tax reform provisions into one piece of legislation, the Conference Committee released its Conference Report on the Tax Cuts and Jobs Act, H.R. 1 (“the Act”), on Friday, December 15, 2017. The nearly 1,100 page bill is has been approved by the House and Senate and signed into law by President Trump. An overview to some of the significant provisions affecting individual taxpayers will be identified and discussed in a series of posts to our blog.

First and foremost, realize that these are the tax changes for the 2018 year (not 2017). If you are looking for tax preparation services, we are the #1 boutique CPA and accounting firm in San Francisco and specialize in high income and business tax issues. We also have a strong focus on international tax, including expat tax return prepation. Second, as we look through the changes to the tax code, we can assist with tax planning so that you can minimize the tax bite going forward under the new law. Just reach out for a free consultation.

The Code provides four tax rate schedules, each of which is divided into income ranges which are taxed at progressively higher marginal tax rates as income increases. Under pre-Act law, individuals were subject to the following tax rates: 10%, 15%, 25%, 28%, 33%, 35%, and 39.6%. For tax years beginning after December 31, 2017 and before January 1, 2026, the following tax brackets apply for individuals: 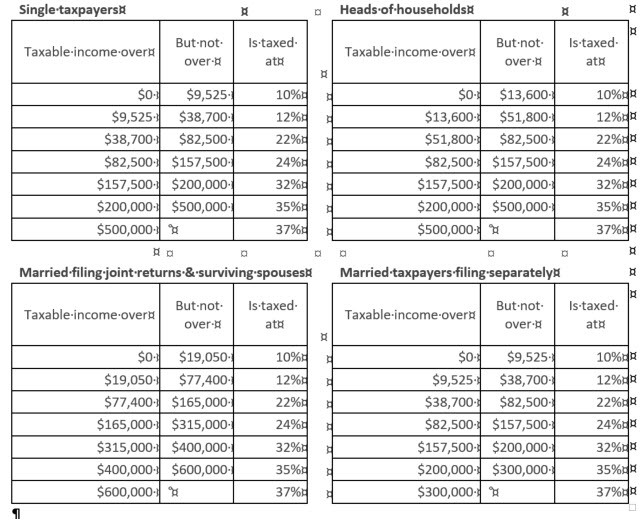 Taxpayers who do not itemize their deductions are allowed to reduce their adjusted gross income (“AGI”) by the standard deduction to determine their taxable income. The amounts under pre and post Act are as follows:

Don’t freak out about all the new tax changes. That’s our job. The new tax changes are complicated and what the government giveth with one hand, it taketh away with the other. So reach out to us for a personalized tax preparation consultation in our San Francisco office. We can meet face-to-face, or do a consultation over the phone. It’s complicated!